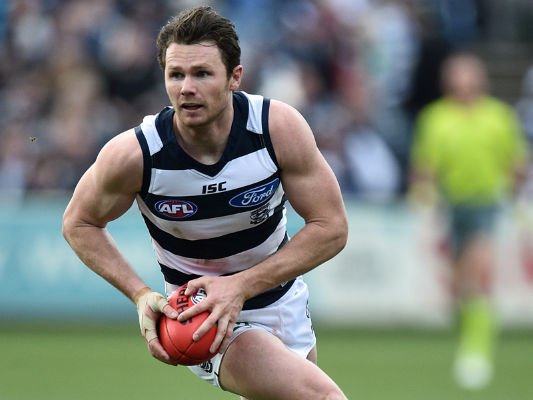 His former Adelaide teammate Rory Sloane was well off the pace in second place with 443 votes, while Richmond midfielder Dustin Martin was third with 297.

Current players vote on the award.

The margin is similar to last year, when Fremantle’s Nat Fyfe won with 1455 and went on to take out the Brownlow.

Dangerfield took his game to a new level after making the high-profile move late last year from the Crows to the Cats.

He is hotly-favoured to become only the ninth player to win the most valuable player award and the Brownlow in the same season.

Apart from Fyfe last year, among current players to achieve the feat, Gold Coast captain Gary Ablett did it in 2009 and 2013.

Also on Tuesday night, Sydney’s Luke Parker won the Robert Rose award as the league’s most courageous player for the second-straight season.

Western Bulldogs star Marcus Bontempelli was named captain of the association’s under-22 team for the season and Essendon onballer Zach Merrett is the vice-captain.

Last Friday night’s epic qualifying final win over Hawthorn means Dangerfield and his teammates have the week off.

They will face the winner of Saturday’s SCG semi-final between Sydney and the Crows in a preliminary final, with the winner going into the grand final.

Dangerfield said it was a privilege to win the MVP award.

“Looking up at the past players and champions who have played our game, to sit alongside (them) and have my name on the trophy is a pretty special moment,” he said.

Asked if his first year at Geelong could have gone any better, Dangerfield replied: “I will let you know in a couple of weeks’ time.”

Yet he admitted it had been a seamless transition. “I’ve been very lucky to come to a wonderful football club,” he said.

Dangerfield said he would not barrack for either side in the SCG semi-final, despite his strong Crows history.

“I have friends at Adelaide obviously who I’d love to see do well,” he said.

“But this time of the year, you have to remove emotion because it’s about us and us winning.

“For us and me, it’s business – we’re here to win and whoever wins (on Saturday), that’s the challenge for us.”