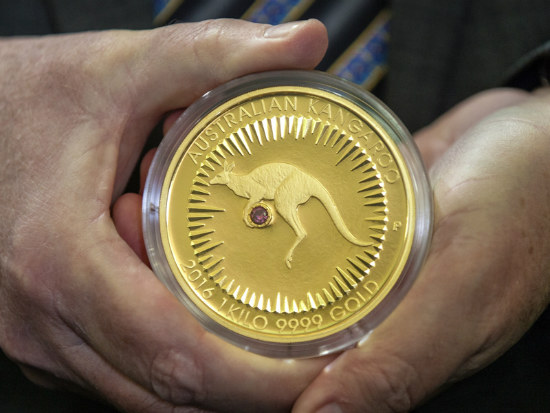 A coin created from one kilogram of pure gold and set with a rare .54 carat WA red diamond is up for grabs from the Perth Mint – for a cool $1 million.

The coin, called the Kimberley Treasure, inspired by Australia’s red kangaroo, will be on public display at the Perth Mint until late August.

The diamond from Rio Tinto’s Argyle mine was so rare they were only found at that site and “you could count on one hand” the number dug up each year, said the Mint’s chief executive Richard Hayes.

There would be about 200 “high net worth” people in the world interested in buying the coin as a collectible, rather than investment, he said.

The legal tender coin has a face value of $5000 and its design includes a red kangaroo holding the round, scarlet gemstone and the image of the Queen on its obverse.